A concerned mom from Dumaguete City travelled all the way to Manila just to have her three-year-old son checked for his acute promyelocytic leukemia. While Nerissa Catan had high hopes that a check-up in Manila could make a difference in her son’s treatment, they unfortunately ended up victims of a ‘taxi spray robbery.’

According to ABS-CBNnews.com, at around 4:40 pm on Wednesday, Catan and her son arrived at Ninoy Aquino International Airport Terminal 3 (NAIA-3). It was rush hour, and traffic in Manila was bad, so rather than wait for a friend to pick them up, she decided to just take the cab. They boarded a white taxi, and told the driver to take them to the Mandaluyong-Greenhills area. When they left, Catan asked the driver why the taxi meter was not working, to which the driver replied, “Ma’am explain ko po sa inyo ha, pag 1 kilometer equals P100. Ibig sabihin, pag Mandaluyong, 8 kilometers, P800 ( Ma’am, 1 km is P100. So 8kms is P800).” She argued to no avail.

In the middle of the altercation, Catan said she noticed the driver “turning the air-freshener like a doorknob” a lot of times. Immediately after that, she felt dizzy. Her son, who was wearing a mask, suddenly felt dizzy, too. Realizing that something was wrong, she asked the driver to stop as she want to get out of the car. But the driver refused, saying they’re on the Skyway going to Magallanes. Before she could pass out, Catan aggressively opened the car so the driver was forced to stop the car. They were able to escape but their baggage, the important slides of her son’s bone marrow from previous check-ups, Php33,000 cash and other valuables were taken by the driver. Fortunately, she remembered the cab’s plate number: UVL-857.

She was brought to a nearby station and tried to report the incident. The enforcer suggested they go back to the airport to ask for a copy of the CCTV footage but the captured video of the car was too far. They even went to the Land Transportation Franchising and Regulatory Board (LTFRB) and Land Transportation Office (LTO) to report the plate which was registered to a jeepney owned by a certain Salvador Vergara of Tondo and, and once traced, LTO asked them to file a formal complaint. But since Catan did not have any more reason to stay in Manila, she did not file it anymore. LTO said they will contact Catan should there be progress about the case.

It was a painful experience especially for a mom who was only doing what she thinks was best for her sick son.  It’s unfortunate that there are people who like to prey on other people.

What do you think can the government do to dael with the increasing number of spraying incidents? 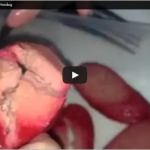 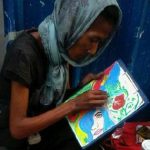