Oxin Entertainment Productions recently released a short film titled, Lindol! Handa ka na ba? directed by studio owner Sean Lim. The team aims to produce a series of short films about earthquake awareness in Manila, especially regarding the movement of the Valley Fault System (VFS). The VFS is composed of the East Valley Fault, which runs through Rizal, and the West Valley Fault, which runs through Metro Manila and the provinces of Bulacan, Rizal, Cavite, and Laguna. The movement of these faults can generate a magnitude 7.2 earthquake which poses threat to peoples lives, buildings and infrastructures, and livelihood. The strength of a 7.2-magnitude earthquake is similar to the earthquake which occurred in Nepal earlier in the year.

Starring Yul Servo, Rowena Mate, Martin Buen, and Theresa Nisperos Whymark, the film’s story revolves around the character “Madame” (Mate), the first lady of the Republic of the Philippines who is asked by her husband President Franco Ledesma to attend a public event in Cavite as his representative. Despite the fact that she dreads politics and the pressure the public’s eye is putting on their family,  she grants her husband’s request. Joined by her secretary (Whymark), a member of her presidential security group Rodel (Servo), and her driver Jordan (Buen), the first lady travels to Cavite when the earthquake hits. According to the synopsis, the first lady “embarks on her final trip to fulfill her duties as a wife and a public figure to a distressed society where the fault of one person in power can shake and break the grounds where its people’s values are anchored.”

As Lim puts it:

Lindol is a story that tests the firmness of the human soul when it is placed in a situation that is more than just life threatening. When an earthquake struck the metro and all that is left are fragments of all the hard work, dreams, and aspirations of its people; the gap between the upper class and lower class is closed. Status quo proves to be a worthless concept that does nothing more but create a false perception that one is greater than the other. Lindol showcases the vim of the human spirit when shaken and when suffering and death is already certain.

What will be there left to say if hope’s gone? Who will matter most in your life? And how would you like to live your last moments?

Oxin is a production company specializing in the production of corporate audio-visual presentations (AVPs), music videos, and independent and mainstream movies in both the local and international scenes. The company is headed by Sean Lim, a director/producer, fashion-photographer, and talent all in one.

Banner photo from a screen cap of the film as uploaded in YouTube. 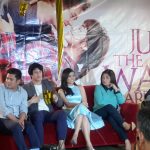 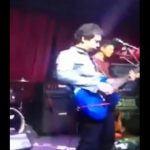