A 90-year old tortoise from Pembroke, West Wales is set to have a good ‘ride’ of its life for the next 90 more years. Mrs. T, as the owner Jude Ryder named it, was almost killed when a rat attacked and bit off her two front legs while she was hibernating. But being a family pet for almost 30 years, Jude did not give up on her and spent £1,000 for the treatment. Sadly though, the veterinarian who took care of Mrs. T feared that the tortoise won’t last for long due to immobility.

So Jude seek the help of his son, Dale, 37, who is a Mechanical Engineer, and attached a set of wheels from a model aircraft onto her shell.

“It was like fitting her with turbo charger – she’s going double the speed she used to“, said Jude Ryder.

According to The Telegraph, Mrs. T joined the Ryder family when she was bought as a pet to then 8-year old Dale. Mrs. T was in her 60’s that time. During spring and summer, she would run around the Ryder’s garden – and was only taken to the garden shed to hibernate.

Jude Ryder said: “Mrs. T is still quite young for a tortoise. She could go on for another 90 years – all she needs is a new set of tyres every now and again. We were afraid she may have to be put down, but her new set of wheels have saved her life. She has the run of the garden again and we can always find her because she leaves very strange tracks behind wherever she goes.”

Watch as Mrs. T sports her wheels below: 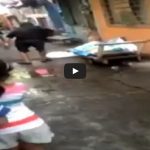 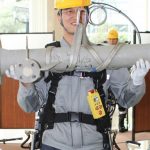