For no apparent reason, a group of youngsters attacked 17-year-old Michelle Gueruela while she was walking home from Meycauyan National High School.

Michelle’s brother, Mark Anthony Gueruela, would later post a video of the attack which he revealed was taken by the attackers themselves! What’s wrong with the young people these days, anyway?

Mark Anthony lamented how the attack was not just uncalled for, but was also too harsh especially because the victim could be heard pleading for mercy. He identified the attackers as Princess Oxciano and John Bernard Bustos on this Facebook post [their photos are posted on Mark Anthony’s FB account].

The attack was so harsh that the sound of the blows could be heard in the video. What is even more heartbreaking is that the victim was pleading for the attackers to stop but the two continued the punching frenzy. Even when someone tried to come in between Michelle and the ferocious teens, the two continued to hit their victim.

Mark Anthony is now seeking justice against the perpetrators, especially after the family learned that the attackers had actually gone to the police station to place a blotter which stated they were the ones attacked by Michelle.

The injustice did not stop there because when the family went to the barangay hall to report the incident, the perpetrators names were only marked as A.K.A. despite them revealing the attackers’ real names.

Seeking justice for Michelle who stiff suffers neck and back injuries as well as nightmares from the incident, Mark Anthony posted the video on Facebook. This was accompanied by a plea for help with the DSWD and the women’s desk at the police station because the blotters presented by the attackers were false.

Here’s the video of the incident: 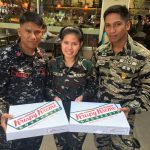 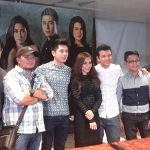