How far can you sacrifice in the name of love?

A resident from Changchun, Jilin Province has been transferring over 147 blood donations in the past 10 years to help her wife survive.

Wu got to know about the blood donation policy that allows spouse of the donator to use blood for free given that his or her spouse can donate a certain amount of blood.

Since he has discovered that they have the same blood type, his blood have had become his wife life support over the years.

“I used to give blood as a good deed, now I do it so that my wife could live longer”, said Xu.

Xu, an electrician, has been hopping from job to job for years because every after getting a call from his wife, he will go home immediately even if he is working outside.

Wang does not need blood transfussion to live, but Xu said he will continue to offer his blood to those who are in need. 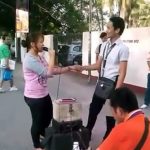