Earlier, netizens lambasted Araneta on social media for opting to make Pinay beauty queens wear designs of Alfredo Barazza, a fashion designer from Colombia. According to netizens, the “unflattering” and “uninspired” gowns of Lastimosa hindered her from making it to the Top 5 of the 63rd Miss Universe Pageant. Lastimosa only qualified up to the Top 10 of the prestigious beauty competition.

In BCPI’s statement posted in its official Facebook page, Araneta is encouraging Filipino designers to collaborate with BCPI. Araneta, who believes in Filipino genius, is willing to work with Pinoy designers who can come up with the best designs that will showcase the beauty of Binibini queens in international competitions.

Laurel, who earlier made a gown inspired by the Pintados tribe stated: “ I just think that perhaps she should open up her mind to this generation of talented designers.”

Lastimosa, who arrived in the Philippines last Thursday, appealed to Filipino fans not to blame her gown for the outcome of the pageant. 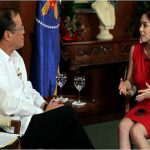