January 18 jump-started with a meeting with the religious leaders and a youth encounter at the only pontifical university in Asia– University of Santo Tomas (UST) in Manila. According to GMA News, the Pope arrived at exactly 9:24 A.M.

The People’s Pope rode the Popemobile to wave at the thousands of people waiting for him. He was, as usual, all smiles and full of energy as he went around the campus.

Pope Francis, we love you!

The crowd cheered and were almost crazy, the authorities actually found it difficult to control them.

The Pope, afterwards, met with religious leaders from 10 different denominations.

His meeting with the leaders was succeeded by a youth encounter participated by young people from different Catholic groups and of different backgrounds and ages.

One of the highlights of the activity was when a street child named Glyzelle Iris Palomar asked the Pope why God lets children suffer.

(Many children are taken for granted by their parents. Many of them are victims of abuse like drugs and prostitution. Why  does God allow this to happen?)

Glyzelle, then, broke down and was hugged by the Pope.

The Pope also delivered a speech to the youth. He challenged them to love, to care for the environment and to love the poor.

The Pope also held hands with the children as they sang the song, “Tell the World.”

Pope Francis’ stay at UST was indeed a blessed one.

The Pope’s last activity in the Philippines was a Catholic Mass in Luneta. According to Catholic News Agency, the mass was attended by around six to seven million people.

The crowd that attended the mass broke the 1995 record of four to five million people attending the World Youth Day with Pope John Paul II as the highest leader of the Roman Catholic Church during that time.

The Pope mentioned the importance of the family and to become “outstanding missionaries” in the region.

May the Santo Niño continue to bless the Philippines and may he sustain the Christians of this great nation in their vocation to be witnesses and missionaries of the joy of the Gospel, in Asia and in the whole world.

Truly, the Pope’s fourth day in the Philippines blessed millions. Enough to break a world record!

What happened in his trip in Tacloban? Please click here. 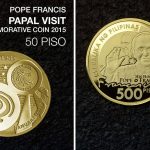 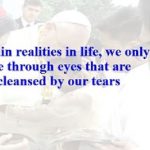