During Pope’s courtesy visit to Malacañang on Friday, President Noynoy Aquino blamed the Filipino clergy for their barren silence during the previous administration.

Before he brought down harsh and offending words against friar leaders he set comparison with the church leaders during Martial Law era citing that they “truly lived their faith and acted as followers of Christ in being their brothers’ keepers.”

“I had a front row seat to that tyranny and persecution. After all, the dictator wasted no time in having my father, one of his most influential and vocal opponents, imprisoned,” Aquino said.

Aquino then went on beating the local church leaders of our country.

“There was a true test of faith when many members of the Church, once advocates for the poor, the marginalized, and the helpless, suddenly became silent in the face of the previous administration’s abuses, which we are still trying to rectify to this very day,” the President said.

“In contrast to their previous silence, some members of the clergy now seem to think that the way to be true to the faith means finding something to criticize, even to the extent that one prelate admonished me to do something about my hair, as if it were a mortal sin. Is it any wonder then, that they see the glass not as half-full, or half-empty, but almost totally empty? Judgment is rendered without an appreciation of the facts,” the President said.

End with a praise note for Pope Francis

At the end of his speech, his voice switched to a mellow praise for Pope Francis.

“I appreciate and respect Your Holiness, for your role as a unifying and revitalizing voice, not just among Catholics, but also among all peoples of goodwill. Exhibiting the same humility, you eschew the trappings of your position, even to the necessary security preparations, which, I should admit, has been somewhat of a security nightmare for us,” Aquino said. 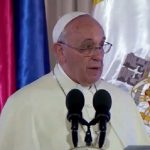 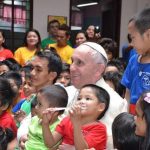