Jaymart Perez Manlimid, a toll booth teller from Batangas City, turned his life around because of his honesty.

On  May 3, Manlimid was on his third day of being a toll booth teller for Malvar South Bound Toll Plaza of Southern Tagalog Arterial Road.

He couldn’t focus on his job properly because the monthly installment of his motorcycle was already overdue.

All of a sudden, a truck driver passing by notified Manlimid that there was a bag outside of his booth.

The money belonged to an OFW based in South Korea named Jocel dela Torre Trania. Trania and his fiancée Manilyn Silva were saving the money for their wedding in June.

Apparently, the bag fell from Trania’s car when he opened his door while passing through the toll booth.

He handed the bag over to his supervisor, Jane Marie Verzero, who made the effort to track down the bag’s owner.

He was also presented with a plaque of recognition by Gov. Hermilando Mandanas.

Manlimid also had the chance to briefly meet up with San Miguel Corporation President and CEO, Ramon S. Ang.

He has had other jobs in the past but they did not last long.

He promised to help out his family after he is done paying off his Mio bike. 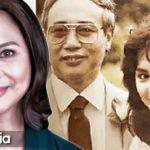