Singer Moira Dela Torre has recently received backlash after performing in an event called the Marcos Fest in Ilocos Norte.

Upon explaining to a Twitter user her side, she said that the event title that she knew was Ilocano Millennial Night as it was addressed as such and Marcos’ name was never mentioned even once. 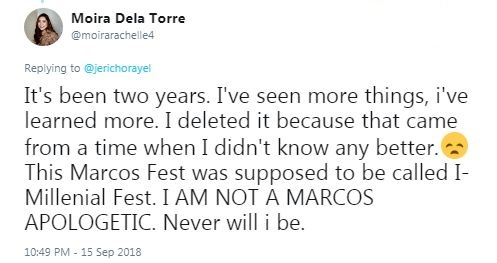 It’s been two years. I’ve seen more things, i’ve learned more. I deleted it because that came from a time when I didn’t know any better.😞 This Marcos Fest was supposed to be called I-Millenial Fest. I AM NOT A MARCOS APOLOGETIC. Never will i be.

No i didn’t.😞 From the earlier reminders til before we got there, they addressed it as the Ilocano Millenial Night. Not once was his name brought up. So let me be clear about this: i performed for the people of Ilocos and NOT for Marcos.

She then resorted to blaming the producer and accusing him of leaving out certain information to make them accept the event.

Twitter user @paranoid_androo contradicted her claims as he tweeted her photos of screenshots of what is supposed to be her Facebook account, reacting to the poster of Marcos Fest. The netizen captioned “You knew it was for Ferdinand Marcos days before the actual event.” 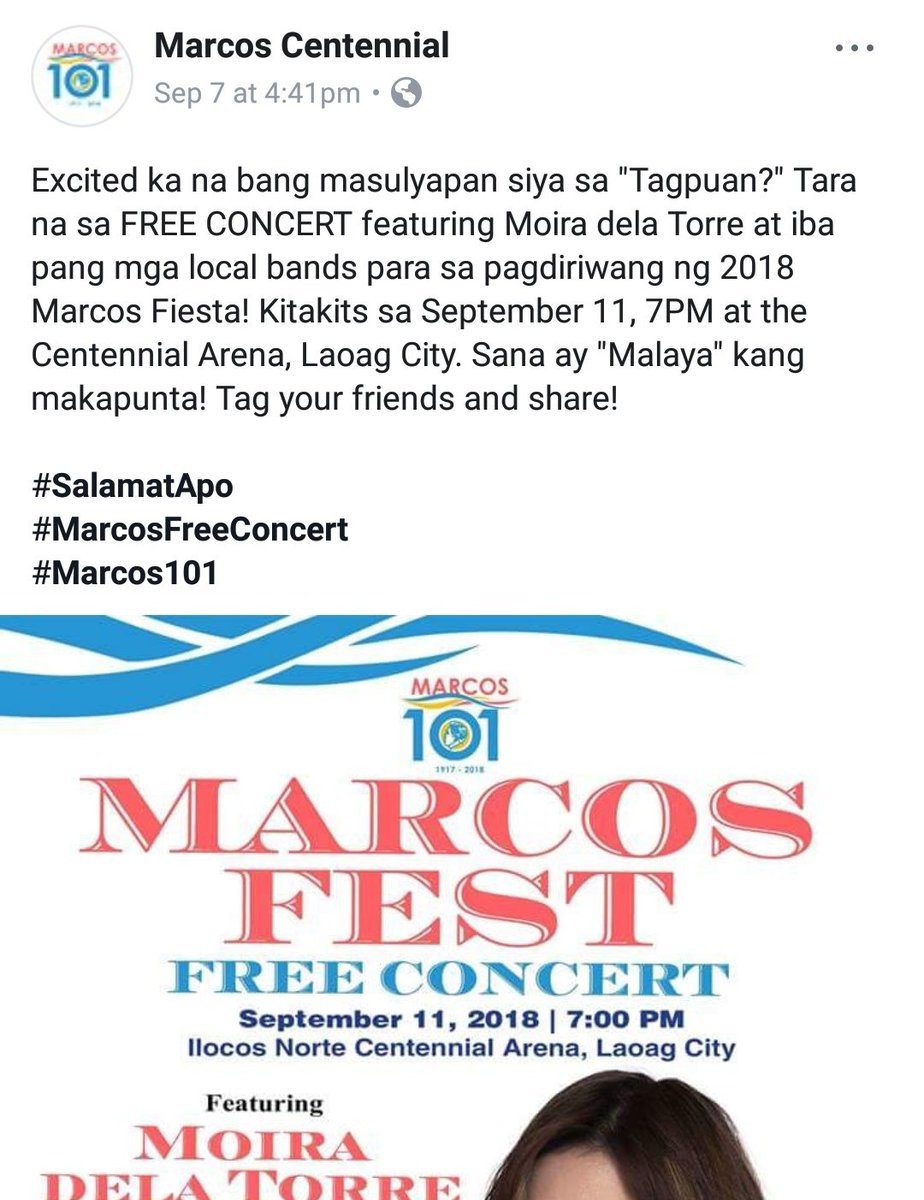 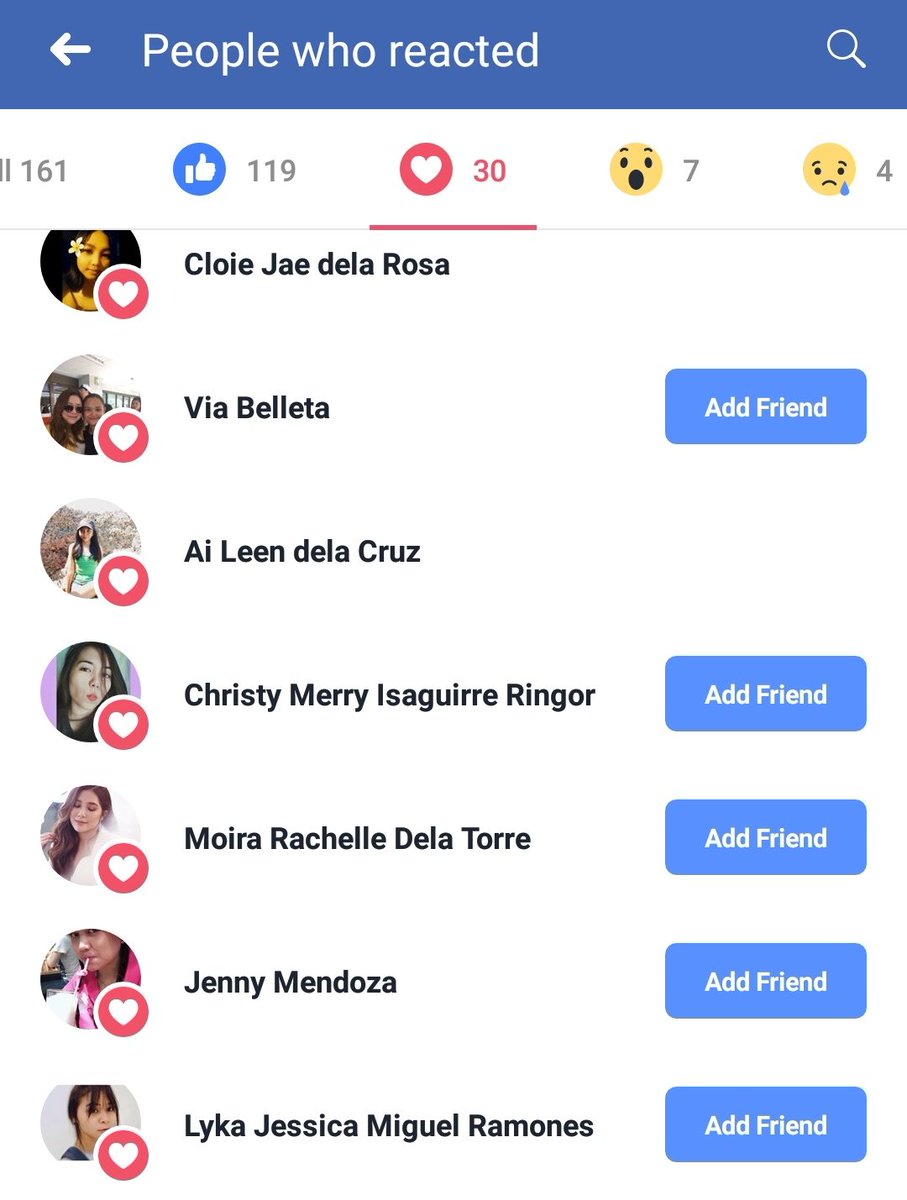 Head of Provincial Tourism Office of Ilocos Norte Aian Raquel posted an open letter to the singer saying that no one tricked her and the photos were up even before she flew to Laoag. Raquel also claimed that the singer has been demanding during her stay in the province.

Nobody tricked you Moira Dela Torre. You knew that the event was called “Marcos Fest,” at the very least posters were up even before you flew to Laoag. Don’t make it seem like we lied to get you to perform. Ask your agent and your manager about it and please, don’t blame the “producers.”
Thank you for bringing your music to Ilocos and we were really appreciative of you even if you were late for 20 minutes and with a bad, sickly voice. You were supposed to perform @ 10pm. We all had fun, Moira.
But now that you are complaining about performing at an event where you’re requirements and demands were given, including your fee, bakit parang nambabastos ka?

The facts are simple- we invited Miss Moira dela Torre to perform her hits and not to play politics. She accepted the gig and we respectfully hosted her here until she left. The venue was packed with gracious Ilocanos who were excited to see her before the devastation of Ompong. Photos and videos will show that Moira had fun on stage, not a hint of unwillingness to perform. We never expected that she would tweet that she is angry for performing at Marcos Fest while we are inundated with the damage of Ompong. Remove all politics and cultural subjectivities and you get the basic and simple issue of courtesy, reciprocal decency, and common sense. 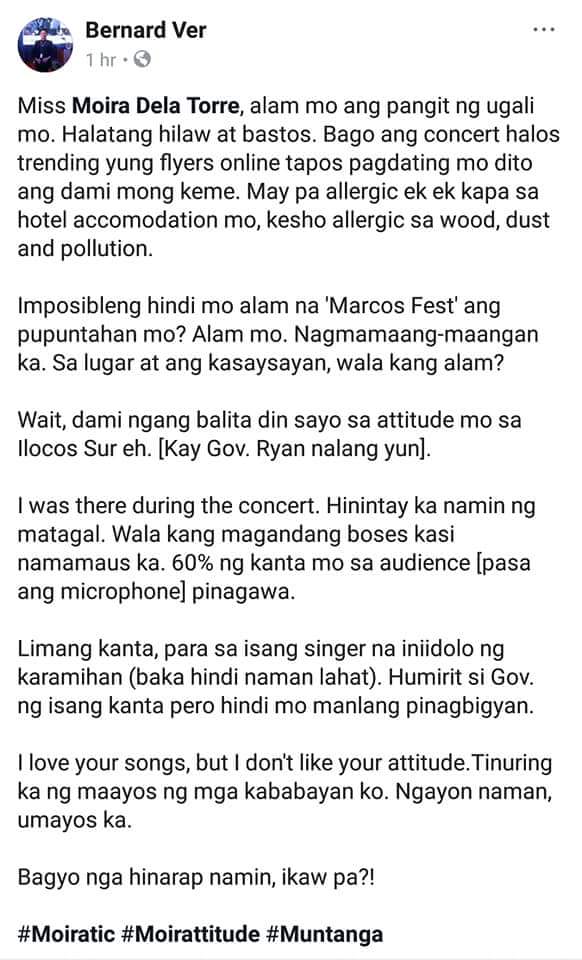 The singer has yet to make another statement regarding the controversy. 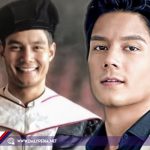 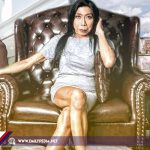