Based on the proclamation, around 50,000 hectares of the Philippine Rise shall become a Strict Protection Zone limited to scientific studies, while more than 300,000 hectares shall be designated as a Special Fisheries Management Area.

Also on Tuesday, the President led the send off of a team of Filipino scientists who will undertake the Coordinated National Marine Scientific Research Initiatives and Related Activities or CONMIRA in the waters above the Philippine Rise.

“I join the Filipino people in wishing you all the best as you embark on your mission to conduct mapping, surveys, biological investigations and assessment of the coral reef and fisheries stock in the area until November,” the President said in his speech during the send off rites held onboard the Navy’s largest ship, the BRP Davao del Sur.

These activities, according to the President, will be vital in the protection and management of the Philippine Rise and its vast resources.

Describing the country’s scientists as “world-class”, he said he recognize the need to provide them with the necessary means to fulfill their mandate.

These developments would not have been possible without the efforts of the dedicated Filipino public servants, scientists and legal experts who worked together to bolster the country’s claim over the Philippine Rise, he said.

When the United Nations Commission on the Limits of the Continental Shelf approved the nation’s claim to the Philippine Rise a few years ago, the country was not just granted access to its vast resources, it was also entrusted with the responsibility to protect it from abuse and misuse, he added.

“Let us therefore explore this [new frontier] fully aware of our responsibility to [properly manage] and conserve its natural resources for the benefit of present and future generations of Filipinos,” he said.

“As send off our experts to explore and discover what our seas have to offer, may we all have a renewed sense of commitment to promote the welfare of our people, safeguard our national interest, [and] assert our sovereign rights over our waters and all other areas within our jurisdiction,” he added.

The all-Filipino contingent will be conducting a Maritime Science Research (MSR) at Philippine Rise. On Wednesday, the Area Task Force North (ATF-North) will initiate casting of the first buoy in the Philippine Rise including the laying of a flag marker at the shallowest point of Benham Bank.

The President also clarified that other countries wanting to explore the Philippine Rise will have to get the consent of the government.

“But for the Filipino scientists, unrestrained. As a matter of fact, the Navy is at your disposal if you think that there are important undertakings to do. So be it, you can use the resources of the Republic of the Philippines,” he said.

The Philippine Rise is a natural submarine prolongation of the Luzon island extending up to 318 nautical miles from the Eastern Philippine Seaboard facing the Pacific Ocean. 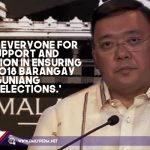