With the surge of presidential front-runner Rodrigo Duterte in the latest poll surveys, business outlook in the country is starting to get jittery.

In a report by ABS-CBN news, BDO Unibank Chief Investment Officer Frederic Ocampo said the market is starting to feel the election jitters as investors see the top two presidential contenders as the “biggest risk” for being “really unknown” to foreign fund managers. He also added that for the first time in recent months, the country recorded net foreign fund outflows in April 2016 as opposed to last month’s net inflows of foreign fund investments which showed the investors are wary of the outcome of the May 2016 Philippine elections.

That view was also echoed by one Filipino netizen and executive of a global company based in Singapore.

In a Facebook post by Tonet Rivera, Executive Vice President for Global Supply Chain of Mead Johnson, he said investors and fund managers have started to sell their pesos after seeing the news about Duterte’s rape remark and how his audience reacted to it.

“So the nervous fund managers start selling their Pesos. Other fund managers notice. ‘They sold sixty million Philippine Pesos? Oh yeah, that crazy country where people laughed along with this rapist candidate,'” he posted.

He also added that the impact of Duterte’s remark which was captured by global media like The Sydney Morning Herald, Le Monde, Straits Times, CNN, and BBC has affected the country’s foreign investments.

“Nobody likes RISK. Other fund managers look at Peso-based equities. Philippine stocks, if valued in dollars, are now worth lower. They own a lot of PHILIPPINE Long Distance Tele… . Hey, isn’t that the country where this candidate regretted missing out on a gang rape?? Look, Microsoft shares are going up, why don’t we dump PLDT for now and buy Microsoft? It’s just prudence. They [are] short 2 million shares… . You know, ‘just for a while,’ until they can see whether the Filipinos can elect a ‘REAL’ President,”  he said.

Meanhile, one netizen posted a counter-claim to Rivera’s post.

Krislam Junsay debunked Rivera’s claims that Duterte’s presidency posts a danger to the country’s economy. In his Facebook note, Junsay reduced Rivera’s claims to mere black propaganda. He said investment confidence is not affected by mere politics and comments from politicians but decisions of business leaders in a country. He also added that controversial comments or remarks have very little effect on investments. He believed that a Duterte presidency will in turn gave way to a boom in investment not only in Manila but in many parts of the country.

Junsay’s argument was also shared by two finance experts—former Department of Budget and Management Secretary and University of the Philippines economist Ben Diokno and Standard Chartered regional economist Jeff Ng. According to them the country’s economy will continue to do well whatever the outcome of the May 2016 elections. They also said the country already has a solid economic foundation so it can withstand whatever the result of the elections will be.

READ: Experts: Economy will do well whoever wins in May polls

Furthermore, Bloomberg also reported the Philippine Peso is at its worst this month amid Duterte’s surge in pre-election surveys.

According to Edwin Guttierez of Aberdeen Asset Management Plc in London, “Duterte represents uncertainty.” He said “He’s a bit of a one-trick pony with his law and order message. I don’t think he’d do anything to upset the apple cart with economic policy, but I don’t see economic reform as being his priority. The comparisons to (Donald) Trump are obviously rather unflattering whether justified or not!”

The Philippine Peso fell by 1.6% in April following poll numbers showing Duterte widening his lead over other presidentiables. 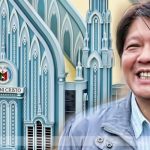 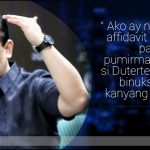