On April 26, the official Facebook page of Richard “Dick” Gordon published an appeal from the senatorial candidate calling on the BOC (Bureau of Customs) to distribute to hungry farmers the sacks of smuggled rice the bureau had recently seized.

However, because parts of the country are currently experiencing drought brought on by El Nino, Gordon suggested that instead of the usual procedure of auctioning off the goods, perhaps the BOC could instead distribute the rice to hungry farmers.

The former senator was also quick to point out that rice smuggling is one of the reasons behind the hardships faced by local farmers. “Dahil sa smuggling, ay hindi nila maibenta sa tamang halaga ang kanilang ani, dahil binabaha ng mga smuggled na bigas ang merkado. (Because of smuggling, because the market is flooded with smuggled rice, farmers can’t sell their crops at the right price.)”

The 15,600 sacks of rice—estimated to be worth at least PhP23 million—were seized last April 15 at the Subic Bay Port. Pending auction, the sacks are currently being stored at the New Container Terminal 2 Pier inside the free port. 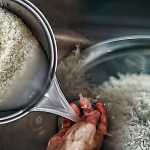 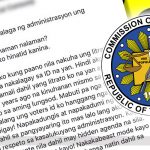